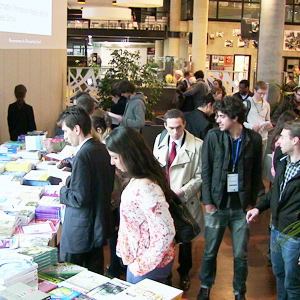 As this year's exciting festival comes to a close, catch up on what you missed and discover the theme for next year's edition. With 2,500 visitors and 6,500 web followers around the world, this sixth edition of the festival was a booming success. Many vibrant moments marked this year's event and more to come next year.

The 2014 Grenoble Geopolitics Festivals was marked by many great moments. From an unexpected visit by the new Mayor of Grenoble to the eagerly awaited visit of Yves Lacoste (considered to be the father of geopolitics), participants in the festival took advantage of the numerous debates, exhibitions, and captivating exchanges that highlighted these four days. This year's theme, "Eurasia as the future of Europe?", was all the more fascinating as the question is at the heart of current events.

Next year's theme: Are borders still useful? To what end?

Debate this new theme at the 2015 Grenoble Geopolitics Festival from March 12th to March 15th, 2015. Pascal Gauchon, co-founder of the festival, concluded this year's event by unveiling the theme for the seventh edition of the festival: "The conclusion of this year's festival opens the door to next year's theme: a debate on the question of borders. Are they still useful? What value do they have in a globalized economy? Should we work for them to disappear in the name of liberty, or reinforce them to protect our roots? What should we do about the invisible borders that separate people, social classes, and cultures?"

Relive the great moments of this year's festival at festivalgeopolitique.com

Were you captivated by the festival? Sign up for our first geopolitics class specifically designed to be a MOOC.