Sophia Guermi is currently studying towards a Dual-Degree at Grenoble Ecole de Management (GEM) and the The French Institute for International and Strategic Affairs (IRIS). She recently won a prize for 'La parole aux 18-28' (Giving the floor to the 18-28 year-olds), organized by 'Le Cercle des économistes' and France Culture on the theme of 'Responding actively to the world's disruptions'.

Tell us about your experience. How did you get to be so interested in geopolitics?

"I discovered and fell in love with geopolitics while doing a Grande Ecole preparatory class. I had the opportunity to participate in a Model United Nations simulation, as part of the Geopolitics Festival.
My choice of institution was guided by the school's expertise in geopolitics and during my time at GEM I took advantage of all the opportunities related to the matter: already by joining the GEM Debate team, for which I was able to organize conferences and roundtables on current affairs and geopolitical topics. Through this, I had the chance to actively participate in the organization of Grenoble's Geopolitics Festival. When came the time to pick specializations in the 2nd Year of the Grande Ecole Program, my attention naturally turned to electives such as Corporate Geopolitics, Geopolitics of the European Union, etc.

It is also through my experience during my law degree at the University Grenoble-Alpes that this passion came about: I followed the degree in parallel to my first two years at GEM, and then, unlike my fellow students, who chose to carry out internships during their gap year, I completed my Master in International Law at the University of Paris-Nanterre. I therefore explored the legal issues that are inherent in international relations, before completing my academic experience with the Dual-Degree delivered by IRIS Sup' in Geopolitics and Foresight.

I was systematically asked during job interviews about my choice of a management school as opposed to Sciences Po. I myself was surprised to realize during my studies that management and governance were very similar. I am especially pleased today to be able to say that my three degrees have enabled me to achieve my original goal: to understand as much as possible the workings of the world in order to find solutions to systemic problems." 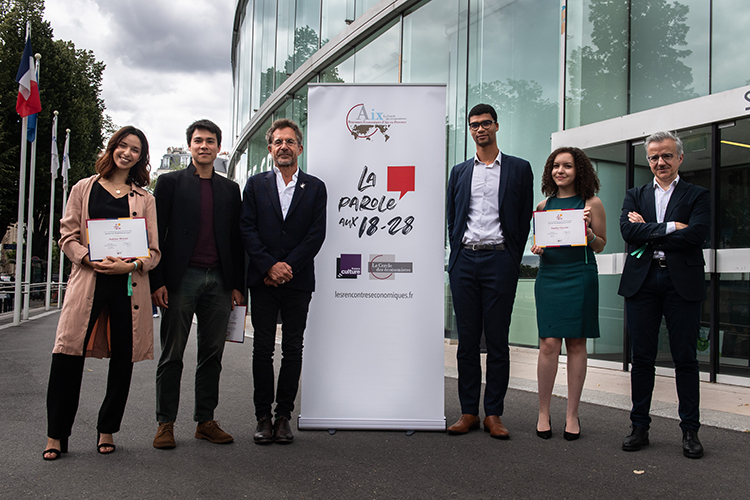 You are one of four winners of the 'La parole aux 18-28' Award. What is the competition about and what did you present?

"'La parole aux 18-28' is organized as part of the 'Rencontres économiques d'Aix-en-Provence'. Over one hundred young people (students and/or young professionals) were selected to attend conferences and partake in one-to-one meetings with guest speakers. As a corporate partner of the event, I discovered this initiative and I immediately decided to apply by sending my CV and filling in a motivational survey. I was fortunate enough to be one of the lucky few selected to participate.

There is also an annual essay competition based on a theme of the event, which in 2020 was 'Responding actively to the world's disruptions'. I was attracted to the topic and passionate about writing, so I chose to participate by doing what I had learned to do during my year at IRIS Sup': have foresight! This convinced the jury, chaired by Etienne Klein, as I have the honor of being among the four winners.

For my contribution, I wanted take a step into the future by writing a History chapter for a 2061/2062 school year textbook, proposing a form of realistic utopia and its vectors of change. There is a lot of me in there: a sense of public interest and the search for the best means of governance at an international level.

Basically, it doesn't matter if that scenario happens or not. What I wanted was to get out of the immediacy and the short term, to escape sterile ideological confrontations in the face of the gravity and urgency of certain phenomena, and to show that, even in the face of the increasing complexity of the world, nothing is insoluble.

What happened after that? What are your new projects?

First of all, I really did not expect the media attention after winning the prize. It also was exacerbated by the fact that this year the event had to take place entirely online, aired from the Maison de la Radio. I was lucky to be featured in the Dauphiné Libéré newspaper, in the Etudiant magazine, on France culture's website... I also wrote a special report for the magazine Pour l'éco, interacted with Laurence Boone and Christiane Lambert on France Inter in a program hosted by Dominique Seux. With the winners, we spoke during the event's Master Class of Etienne Klein, president of the jury, to present our contributions and talk about our expectations with regards to the 3-day debates that took place from July 3rd – 5th (available in replay). Subsequently, I was also asked to be a speaker at another conference in 2021.

And all this is not over: with the others selected to participate in 'La Parole aux 18-28' we will finally meet (as we weren't able to do it earlier) in September in Aix-en-Provence. With the 'Cercle des économistes', which organizes the "Rencontres", we are also thinking about different ways to anchor our partnership over time.

Beyond the obvious honor of being recognized for my ideas and the way to promote them, moreover by a jury of such quality, thanks to this award, I feel even more legitimate not as a young person, but as a professional, as a specialist in governance and geopolitics, and fully relevant when talking to diverse audiences.

To go a step further:

1/All of GEM programs feature geopolitics. An annual event has even been dedicated to this topic for 12 years: the Grenoble Geopolitics Festival.
Find out more about geopolitics at Grenoble Ecole de Management