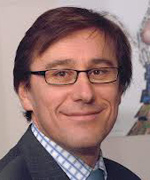 Thirty years of innovation, thirty years of networking, thirty years of expansion. As Grenoble Ecole de Management (GEM) celebrates its 30th anniversary, the GEM Graduate Network (GEM GN) looks to the future. Laurent Janoviez, GEM ESC '88 and president of GEM GN, reaches out to alumni to build the future together.

This year marks 30 years of innovation at Grenoble Ecole de Management (GEM). In going from a small local company to an international group, GEM has gained recognition among top industry leaders and recruiters while solidifying its position among the top French Grandes Ecoles de Management. Never taking anything for granted, our commitment to innovation has been the cornerstone of GEM. With 20,000 graduates worldwide, the GEM Graduate Network (GEM GN) has also had to innovate year round to meet the needs of this lively network. The challenge is all the more exciting as our current graduates have yet to retire and we expect 20,000 new graduates over the next ten years.

Through the creation of the Alumni Relations Team, the GEM Group has also lent its support both in terms of manpower and financing. GEM GN will continue to build on this in order to expand internationally and organize itself according to fields of study, interests and geographical regions.

From day one, new students at GEM are given the tools to benefit from this network. GEM GN offers them help throughout their studies, from finding internships and traineeships to financial support thanks to our endowment.

GEM GN continues to assist and accompany our students after graduation through numerous initiatives launched over the past ten years. However, the fact remains that these initiatives are not well-known and we have to improve our communication. Each alumni is an ambassador for the school and can help us maintain this network. While potential students meet alumni during their entrance exams, what happens afterwards? There are already so many existing ways to participate in and enhance this network:

From career services to international gatherings, job offers, coaching, networking events in each city and of course our yearly Gala, an event that celebrates graduating class anniversaries and highlights the work of alumni through our trophy "GEM of the year."

The year 2014 is a turning point for our association as we implement the initiatives that will allow us to accompany GEM's international expansion. We have to guarantee the renown of this unique brand as it accompanies each of our graduates throughout their careers.

In order to share this vision of the future, I would like to invite all of our alumni to our Gala in Paris on November 29th, 2014. GEM GN is truly proud of the solid foundations we have built together, and with your support as well as the Alumni Relations Team, we are ready to grow with GEM over the next 30 years.

On that note, I wish a very happy 30th anniversary to our young and vibrant GEM Group as well as all those who participated in this wonderful adventure!